Residents in a working-class district of the Ivory Coast city of Abidjan on Sunday destroyed a coronavirus testing centre that was under construction, police and health ministry officials said.

Videos posted on social media, showed several dozen people dismantling the building, some of them shouting: “We don’t want it!”

The incident happened in Yopougon district of the city of five million inhabitants, which is the country’s commercial capital.

Locals had demonstrated against the centre because they thought it was too close to their homes and right in the middle of a residential district, one police officer told AFP on condition of anonymity.

But the building, which was still under construction, had never been intended as a treatment centre for virus patients but only as a testing centre, said a health ministry official, who also asked not to be named.

This was the first violent incident connected to the COVID-19 outbreak in the country, which so far appears to have been relatively untouched by the virus, at least according to official figures.

They put the number of cases at 261, with three deaths so far.

Nevertheless, the authorities are trying to increase their capacity to treat the outbreak. 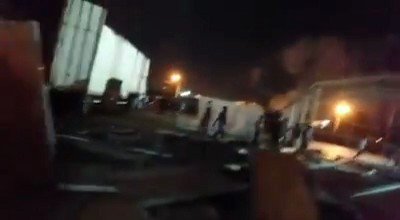